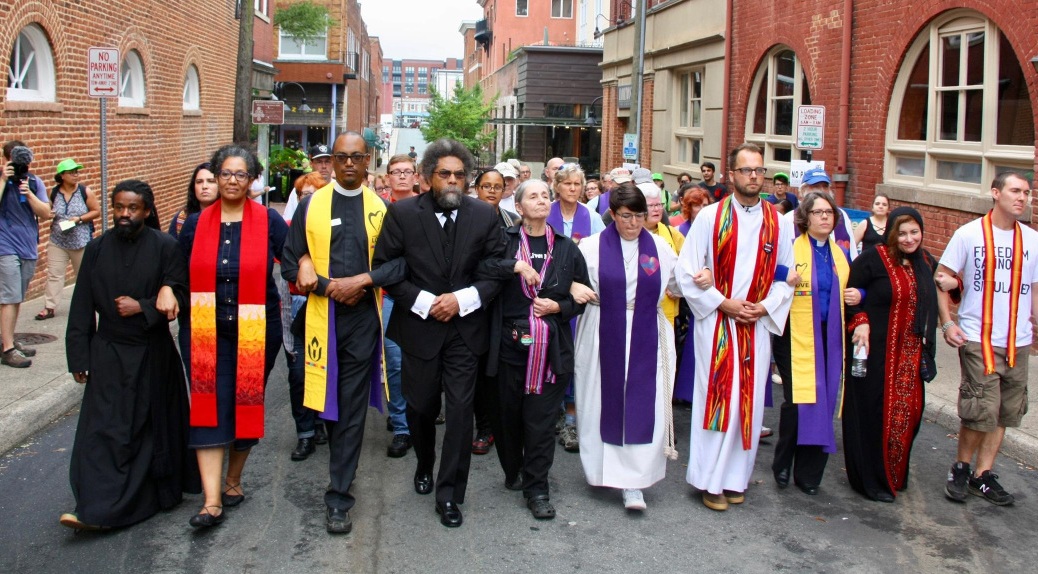 From Spiritual Sanctuary to Activist Community

The first time I walked into a Unitarian church, I was looking for spiritual sanctuary. I was still recovering from my faith transition away from the religion of my birth. Unitarian Universalism offered a community of people, many of whom also had rejected traditional Christianity for one reason or another, but like me still believed in the power of religion to effect personal and social transformation. Many of the people I met in the Unitarian church were also seeking sanctuary from a Christian-dominated culture. Others were looking for an activist community which would support their work for racial, economic, and environmental justice, women’s rights, and LGBT equality. Some people were looking for both.

Over the years, I heard some of the more activist-oriented people say that they found their spirituality in activism. Being more sanctuary-oriented at the time, I would think to myself: “Clearly you don’t know what spirituality is.” Spirituality, for me, was very inwardly focused. It had more to do with personal development than social change. It turns out, it was I that didn’t know what activism was. Over the last few years, as I have become more and more involved in activism, I have made a discovery: I have discovered a kind of spirituality in activism.

When I say “activism”, many people think of political demonstrations and marches. But activism is much broader than that. Activism includes any action which is intended to make the world more just, sustainable, and compassionate. The Unitarians who volunteer at the local soup kitchen are activists. The women in the Unitarian church who knit shawls and scarfs for others are engaged in activism. The Buddhist who leads a weekly meditation group in the Unitarian church is an activist too.

I’m engaged in different kinds of activism, but marching in protests is still one of my favorites. Most recently, I’ve participated in the Women’s March, the March for Science, and the People’s Climate March, as well as many smaller marches and demonstrations. Over time, I began to notice how marches can sometimes be a spiritual experience. Not that every march is conducive to this or that everyone experiences marches this way, but they can be spiritual experiences.

I’ve noticed certain similarities between protest marches and the religious rituals. There’s the intentional use of symbolism—especially visual symbolism—used to evoke emotion, to activate the so-called “right brain”.  There’s the chanting that is common to both political demonstrations and many religious rituals.  Even the physical act of marching or walking itself can resemble a kind mini-pilgrimage or walking meditation. Environmental marches in particular often begin with a ritual led by indigenous activists.

Protest marches bear an especially close resemblance to the Neo-Pagan rituals I’m familiar with. Both marches and Pagan rituals are designed to raise energy. “Energy” is a term which Pagans often use in reference to rituals and activists often use in reference to marches and other demonstrations. It refers to the collective emotional or psychological energy which can be channeled into positive social action.

What Starhawk says about rituals, I would say about marches as well:

There’s four different ways that marches and other political demonstrations can transform our consciousness:

Owning our Pain for the World

To some outside observers, protest marches and demonstrations may seem like self-indulgent catharsis. There is definitely an element of catharsis in protest, but I think that’s a good thing. In Coming Back to Life: The Guide to the Work that Reconnects, activist Joanna Macy writes about the importance of embracing the grief and pain which we feel when as we become more aware of what is going on in the world around us. Our pain is a manifestation of our interconnectedness with other beings, both human and other-than-human. But this grief need not be paralyzing. If we embrace it, as Macy urges, we affirm our participation in the web of life. We feel it on a visceral, not just an intellectual level. This leads us, counterintuitively, to a sense of empowerment, power to speak and act on behalf of those other beings. Protesting is an opportunity to collectively honor the pain that we feel, rather than repressing it or trying to distract ourselves from it.

Seeing the Truth of Our Interconnectedness

People who participate in marches or other demonstrations commonly describe a strong feeling of community or connectedness. This has both practical and spiritual benefits. In practical terms, it fosters a sense of solidarity which can lead to collective action in the future. In spiritual terms, it reminds us that the source of our power is our interconnectedness. Our culture alienates us from one another, from the earth, and from our own true selves. It convinces us that we are alone, and alone we are powerless. Marching together is one way to overcome that alienation and reconnect with others. And as we realize our essential connection to others, we discover our true nature as part of an interconnected web of life.

Feeling Our Power to Change and Heal

Marching is empowering. Just as our pain for the world arises from our sense of connection, so does our power. But this power is very different from our customary hierarchical notions of power, which involves power over others, power as domination or control. In Truth or Dare: Encounters with Power, Authority and Mystery, Starhawk distinguishes “power over” others from “power with” others. “Power with” is a collaborative power which arises from our being a part of a larger whole. It arises from our connections with and compassion for others. Tapping into this kind of power paradoxically requires us to open ourselves to vulnerability, while still remaining vigilant and assertive. From this kind of power arise new possibilities which we could not have predicted in our alienated state. We may begin to feel we are being acted through by a power greater than ourselves, whether conceived as divine or not.

Going Forth into the Action that Calls Us

This new sense of empowerment, combined with a heightened awareness of our interconnectivity, propels us to broaden and deepen our engagement with the world. Marching and protesting raises energy which carries us forth and sustains us in other forms of activism.

‘When we posit a fundamental separation between liberation of self and transformation of society, we tend to view the personal and the political in a sequential fashion. “I’ll get enlightened first, and then I’ll engage in social action,” we say. ”I’ll get my head straight first, I’ll get psychoanalyzed, I’ll overcome my inhibitions or neuroses or my hang-ups and then I’ll wade into the fray.” Presupposing that world and self are essentially separate, we imagine we can heal one before healing the other. … It is my experience that the world itself has a role to play in our liberation. Its very pressures, pains, and risks can wake us up — release us from the bonds of ego and guide us home to our vast, true nature.’ ― Joanna Macy, World as Lover, World as Self