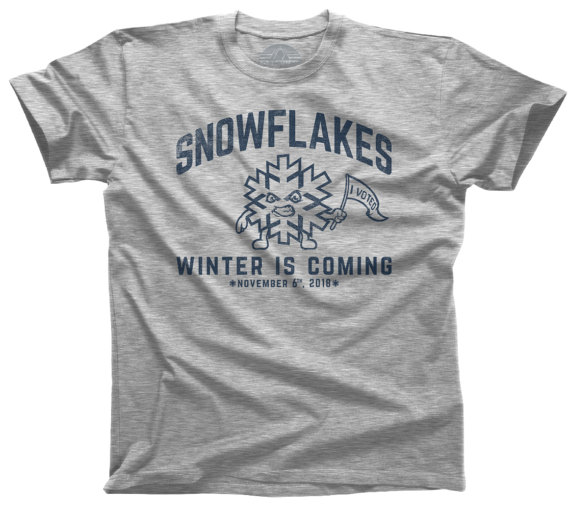 In my last post, “Ain’t No Snowflakes Here”, I said that the gun control advocates whom I have met are anything but snowflakes.  From the septuagenarian mother of a gun victim with her poster board sign who was prepared to be run over by gun-toting, pickup truck-driving, Confederate flag-flying yahoos, to the kids who faced down parents, principals, and peers a few days later to make their voices heard about gun violence in schools–these people are tough!

I also pointed out that it was the gun rights advocates who turned out to be the real snowflakes–hiding in their pickup trucks and behind their laptops because they were afraid of an unarmed, peaceful protest consisting largely of senior citizens and children.

But I may be been inadvertently playing into the same macho culture which drives the gun nuts–what Amanda Hess of the New York Times describes as “the idea of a culturewide wussification that must be fought with a return to aggression, physicality and ego.”

I played into this dynamic once again at the gun show protest, when a representative of the National Organization of Women took the mike to describe the connection between guns and violence against women, and I shouted, “Real men don’t need guns!”  The whole idea of “real men” just perpetuates the culture toxic masculinity which seems to be the real motivator behind so much gun violence.

So perhaps calling gun rights advocates “snowflakes” really isn’t helpful.  How should be respond when they call us snowflakes then?  Dan Schwartz of GQ writes, “The only way to fight back against an insult that doesn’t mean anything is to reclaim it, to diminish its power by making that identity a point of pride.”

“From queers to suffragettes to impressionist painters, terms meant to deride become a catchy point of pride, a snarky acknowledgement of appealing underdog status that galvanizes membership. People who thought Hillary Clinton was referring to them as ‘deplorable’ put it in their Twitter names; women who related when Trump called Clinton a ‘nasty woman’ responded by emblazoning the phrase on their t-shirts.”

Should we embrace the “snowflake” label?  Well, one thing about snowflakes is, they are small, but they can add up quickly, and what seems insignificant at first glance, can turn into a powerful storm.  Patriarchal culture teaches us that our only power is as rugged individuals. But our real power is in collective action. The image of the snow storm, made up of billions of snowflakes seems apt then.

As does the increasingly popular retort (inspired by Game of Thrones), which has appeared on protest signs, T-shirts, and internet memes:

John Halstead is the author of Another End of the World is Possible, in which he explores what it would really mean for our relationship with the natural world if we were to admit that we are doomed. John is a native of the southern Laurentian bioregion and lives in Northwest Indiana, near Chicago. He is a co-founder of 350 Indiana-Calumet, which (until recently) worked to organize resistance to the fossil fuel industry in the Region. John was the principal facilitator of “A Pagan Community Statement on the Environment.” He strives to live up to the challenge posed by the Statement through his writing and activism. John has written for numerous online platforms, including Patheos, Huffington Post, PrayWithYourFeet.org, and Gods & Radicals. He is Editor-at-Large of HumanisticPaganism.com. John also edited the anthology, Godless Paganism: Voices of Non-Theistic Pagans and authored Neo-Paganism: Historical Inspiration & Contemporary Creativity. He is also a Shaper of the Earthseed community, more about which can be found at GodisChange.org. View all posts by John Halstead