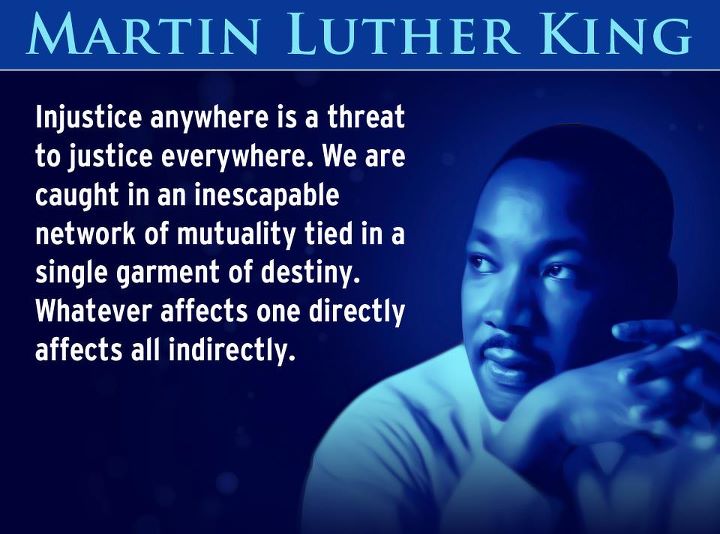 “A Single Garment of Destiny”

In his penultimate sermon, delivered on March 31, 1968, at the National Cathedral in Washington, D.C., Dr. Martin Luther King, Jr., spoke of our interconnectedness:

“Through our scientific and technological genius, we have made of this world a neighborhood and yet we have not had the ethical commitment to make of it a brotherhood. But somehow, and in some way, we have got to do this. We must all learn to live together as brothers or we will all perish together as fools. We are tied together in the single garment of destiny, caught in an inescapable network of mutuality. And whatever affects one directly affects all indirectly. For some strange reason I can never be what I ought to be until you are what you ought to be. And you can never be what you ought to be until I am what I ought to be. This is the way God’s universe is made; this is the way it is structured.”

The phrases “inescapable network of mutuality” and “single garment of destiny”, as well as the corresponding theme of interdependence, appeared many times in King’s writing and speeches.

In his 1963 “Letter from a Birmingham Jail”, which was written as a response to an open letter from a fellow clergyman criticizing his participation in civil rights demonstrations, King responded:

“Injustice anywhere is a threat to justice everywhere. We are caught in an inescapable network of mutuality, tied in a single garment of destiny. Whatever affects one directly, affects all indirectly.”

In his 1963 “I Have A Dream” speech, delivered at the Lincoln Memorial, in Washington D.C., King said:

“The marvelous new militancy which has engulfed the Negro community must not lead us to a distrust of all white people, for many of our white brothers, as evidenced by their presence here today, have come to realize that their destiny is tied up with our destiny and their freedom is inextricably bound to our freedom.“

In his Nobel Prize acceptance speech, delivered in Oslo in 1964, King said:

“In the final analysis, the rich must not ignore the poor because both rich and poor are tied in a single garment of destiny. All life is interrelated, and all men are interdependent. The agony of the poor diminishes the rich, and the salvation of the poor enlarges the rich. We are inevitably our brothers’ keeper because of the interrelated structure of reality.”

In his 1965 sermon, “Keep Moving From This Mountain”, King said:

“And we’ve been in the mountain of indifference too long and ultimately we must be concerned about the least of these; we must be concerned about the poverty-stricken because our destinies are tied together. And somehow in the final analysis, as long as there is poverty in the world, nobody can be totally rich. We are all caught in an inescapable network of mutuality, tied in a single garment of destiny. And what affects one directly affects all indirectly. For some strange reason, I can never be what I ought to be until you are what you ought to be. And you can never be what you ought to be until I am what I ought to be.”

“In the final analysis the weakness of Black Power is its failure to see that the black man needs the white man and the white man needs the black man. However much we may try to romanticize the slogan, there is no separate black path to power and fulfillment that does not intersect white paths, and there is no separate white path to power and fulfillment, short of social disaster, that does not share that power with black aspirations for freedom and human dignity. We are bound together in a single garment of destiny.“

Though environmental devastation was not a theme of Martin Luther King’s work, King has rightly been called “one of the great ‘ecological’ thinkers of the 20th century”, because of the centrality of the concept of interconnectedness to his thought.

The concept of interconnectedness is also central to modern ecology.  Interconnectedness refers to the concept that all living beings exist in relation to all other living beings. Our very being is determined by our ecology, by the material and cultural environment which we share with all other living beings. We are immersed in a web of life which is our true community.  As  naturalist John Muir said, “When we try to pick out anything by itself, we find it hitched to everything else in the Universe.”

Take a look at a tree, for example. Physically you are connected to the tree by the reciprocal flow of gasses, oxygen and carbon dioxide. As you breathe in, the tree breathes out; as you breathe out, the tree breathes in. The water flowing through the tree may soon flow through your body. Indeed, the very matter of what you are made was probably part of another tree long ago and will become part of yet another tree some day in the future.

This is true not only of our relationship to plants, but also animals, including other human beings.  We are all part of the web of life, or what King called the “single garment of destiny” and an “inescapable network of mutuality”.  And this idea is at the core of anti-racism advocacy.

Underlying contemporary opposition to anti-racism advocacy is a metanarrative of individualism, which stands in contrast to the ecological concept of interconnectedness.  In The Miner’s Canary: Enlisting Race, Resisting Power, Transforming Democracy, Lani Guinier and Gerald Torres observe that both liberals and conservatives endorse this same metanarrative: “[S]trategists on both the left and right, despite their differences, converge on the individual as the unit of power.”

So many responses of Whites to anti-racism advocacy assume that racism is an individual phenomenon, not a collective phenomenon.  Racism is understood by them to be a characteristic of individuals and manifesting as individual expressions of racist beliefs, like a White person calling a Black person the N-word.  And this is why so many White people respond to ant-racism advocacy by saying, “I’m not a racist.”  But such responses really miss the point.  We can debate whether or not you, or any other individual, has implicit racial bias, but the real elephant in the room is systemic racism.

Michelle Alexander explains in her book, The New Jim Crow: Mass Incarceration in the Age of Colorblindness:

“As a society, our collective understanding of racism has been powerfully influenced by the shocking images of the Jim Crow era and the struggle for civil rights. When we think of racism we think of Governor Wallace of Alabama blocking the schoolhouse door; we think of water hoses, lynchings, racial epithets, and “whites only” signs. …
“Our understanding of racism is therefore shaped by the most extreme expressions of individual bigotry, not by the way in which it functions naturally, almost invisibly (and sometimes with genuinely benign intent), when it is embedded in the structure of a social system.
“The unfortunate reality we must face is that racism manifests itself not only in individual
attitudes and stereotypes, but also in the basic structure of society.”

Allow me to give you an example.  I live in a predominately White community.  Just a few miles away is Gary, Indiana, which is predominately Black.  A few years ago, I learned that the schools in Gary were suffering from chronic heating shortages, and the school kids were forced to wear coats, hats, and gloves in class.  That would never have happened in my kid’s school.

This is a form of systemic racism.  It is caused by a racist educational system, which systematically allocates fewer resources to communities of color, and it is perpetuated by a collective indifference of Whites to what happens to People of Color. And all of this happens without any explicit expression of racism by any individuals.  Thousands of Black children who live just a few miles away from me are systematically denied an equal education, and all that happens without anyone ever uttering the N-word.  In light of this, White declarations of “I’m not a racist” ring hollow.

The metanarrative of individualism can also be seen in another common response of Whites to anti-racism advocacy: tokenism.  Tokenism is when Whites point to individual People of Color who have achieved some degree of (usually financial) success, in order to rebut the idea that People of Color are systematically disadvantaged.  Michelle Alexander explains, “[C]osmetic diversity, which focuses on providing opportunities to individual members of under-represented groups, both diminishes the possibility that unfair rules will be challenged and legitimates the entire system.”

It is not enough for Whites to proclaim our non-racism; we must become actively anti-racist.  We live in a racist system.  This is part of Martin Luther King meant when he said we are “caught in an inescapable network of mutuality” and “tied together in the single garment of destiny”.  Being non-racist does not exculpate White people like me.  We benefit from racist systems, while People of Color are disadvantaged.  Whether or not we are guilty of individual acts of racism or implicit racial bias is almost beside the point;  we are still responsible for the part we play in the system.  If we’re not working to dismantle the structures which maintain racist systems, then we are helping to maintain those systems.  If we are not part of the solution, then we are part of the problem.